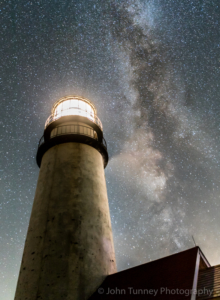 The best lenses for photographing the Milky Way are fast wide-angles. By “fast” I mean a lens with an f-stop of f2.8 or lower. You can get away with an f4 lens, but an f2.8 lens is better. Every full stop down collects twice as much light as the previous stop. So an f2.8 lens will collect twice as much light as an f4 lens. This means you can use a lower iso, which means less noise. It also mean you can opt for a shorter shutter speed, which means less streaking of the stars.

Wide Angles
A wide-angle lens will let you capture more of the sky and include foreground elements for a better composition. For full-frame cameras, stick with 24mm or less. You can get nice shots with longer focal lengths, especially if you shoot to stitch a panoramic, but 24mm or less will generally give you the most pleasing single-shot results.

For APS-C cameras, stick in the 10-16mm range. This will give you the full-frame equivalent of roughly 15-24mm.

When researching lenses, check what they say about coma – comatic aberration. It stretches points of light, like stars, at the edge of the frame, giving them “wings”. Most lenses have some coma, especially the super wide and fast lenses, but less is better.

Below are some lenses recommended specifically for astrophotography. These are all lenses that I own or have owned, or would consider buying.

For full-frame and crop cameras

– This is a classic among night photographers. Samyang makes two versions – a manual focus and an autofocus. At under $300, the manual focus is a bargain and a great entry-level lens for astrophotography. The autofocus version also comes with weather sealing and runs about $800.

– This has become a very popular lens for astrophotography. I haven’t used it yet, but it gets great reviews, and is on my short list. $1099.

– Like the Rokinon 14mm for full frame cameras, the 16mm is class entry-level lens for astrophotography. Manual focus.  About $350.